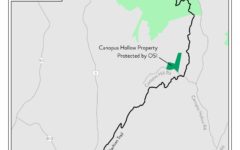 Town of Putnam Valley, NY (April 19 , 2021)— The Open Space Institute today announced the purchase of land in Putnam County that will further the ecological and recreational connectivity of the eastern Hudson Highlands. The newly acquired property, which is adjacent to protected lands of the Appalachian Trail and less than half a mile away from Fahnestock State Park, will provide additional opportunities for outdoor enthusiasts to better access popular recreation destinations. Additionally, OSI’s acquisition safeguards the property from future residential development and protects the area’s natural resources for wildlife habitat.

The 32-acre “Canopus Hollow” property was purchased by OSI for $382,500 from the Lafata Family Irrevocable Trust. The newly acquired property features an old farm road which has the potential to provide safe, off-road parking and serve as the location for a new trailhead. Once conveyed to the state, the Canopus Hollow property will offer hikers, runners and cyclists a new entrance point into Fahnestock State Park and the Appalachian Trail.

“Improving access to New York’s public lands is at the core of OSI’s parks work,” said Kim Elliman, OSI’s president and CEO. “OSI’s recent acquisition continues our long history of conservation projects in and around Fahnestock State Park that improve access and enhance the experience for the park’s more than 300,000 annual visitors.”

“Keeping these lands safe from development is crucial to preserving the rare natural beauty and ecology of the eastern Hudson Highlands,” said Erik Kulleseid, Commissioner of the Office of Parks, Recreation and Historic Preservation. “I’m grateful to the Open Space Institute for their work to protect this landscape.”

John Lafata, who had owned the property with his family for more than 25 years, said, “I am delighted to see this property permanently protected and feel satisfied knowing that the land will never be developed. For more than two decades the property held a very special place in my heart, and now, the peacefulness I experienced there on the land will be shared with others.”

According to Katrina Shindledecker, the Hudson Highlands Land Trust's Deputy Executive Director, "We were happy to be able to help facilitate conserving the property. It's a part of an ecologically sensitive and highly scenic connectivity corridor that buffers the Appalachian Trail and connects Hudson Highlands State Park Preserve to Fahnestock State Park." Ms. Shindledecker further indicated that "The Open Space Institute's acquisition of the property will prevent irrevocable damage to the land’s pristine natural resources, safeguard water quality and a wildlife corridor, all while protecting a nationally-renown wilderness-quality recreational opportunity."

OSI’s acquisition shares an approximately 2,120 feet boundary with the Appalachian Trail, which is owned and managed by the National Park Service. A celebrated long-distance hiking trailway, the Appalachian Trail runs just east of the Canopus Hollow property and connects the 8,000-acre Hudson Highlands State Park with Fahnestock State Park’s 14,000 acres.

The Canopus Hollow property was identified in New York State’s Comprehensive Wildlife Conservation Strategy Plan and the Metropolitan Conservation Alliance’s Croton-to-Highlands Biodiversity Plan as part of a relatively undeveloped corridor, of forests, wetlands, and grasslands, of regional importance. The corridor is one of the most biodiverse areas within the entire four-town region of Cortlandt, New Castle, Yorktown, and Putnam Valley.