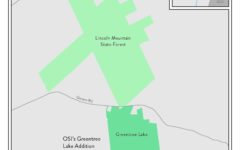 Greenfield, NY (May 28, 2020)— The Open Space Institute (OSI) today announced the acquisition of a property in the Town of Greenfield that is critical to the creation of a 13-mile recreational green corridor in the southern portion of the Palmertown Range.

The newly protected 84-acre “Greentree Lake Addition” property features woodlands, wetlands, and an open pond, and has significant value for habitat protection. Adjacent to OSI’s previous “Greentree Lake” acquisition, the two properties will now establish 350 acres of protected land connected to Lincoln Mountain State Forest and have the potential to serve as a new, southern access point for the forest.

“Protecting the land is a key step forward in creating a recreational trail connecting Saratoga Spa and Moreau Lake State Parks,” said Kim Elliman, president and CEO of the Open Space Institute. “With access to trails and open space at a premium, it is critical that we continue to move forward and support projects that boost community recreation, transportation, and health.”

Department of Environmental Conservation (DEC) Commissioner Basil Seggos said, “The Open Space Institute is helping to preserve another special piece of New York’s natural beauty. With outdoor enthusiasts and nature lovers flocking to New York’s great outdoors like never before, it is critical to make strategic investments that support smart growth, enhance recreational opportunities, and boost local economies without sacrificing wildlife protections. DEC applauds OSI’s acquisition of the 84-acre Greentree Lake Addition in the Adirondack foothills that will ensure future generations have the opportunity to explore and experience all the beauty these lands have to offer.”

The Greentree Lake Addition property is a key linkage in the center of the Southern Palmertown Range recreational corridor, a proposed 13-mile trail that will ultimately connect Moreau Lake and Saratoga Spa State Parks. OSI’s acquisition presents one of the only opportunities to connect the recreation corridor through a developed area and will eventually provide community access to the Palmertown Range recreational corridor.

“OSI’s acquisition is another conservation win for protecting this landscape so that the growing population on the Range’s edges can enjoy a wilderness experience within easy access of their homes,” said Maria Trabka, Executive Director of Saratoga PLAN. “In addition to endless recreational opportunities, the Palmertown Range provides climate resilient habitat, replenishes our clean drinking waters, streams and lakes, and fosters a sustainable forestry industry.”

In 2017, OSI, in partnership with Saratoga PLAN and local partners created the Southern Palmertown Range Community Conservation and Recreation Strategy, a conservation and recreation road map for the sector of the Adirondack Foothills that runs from the Hudson River at the northern edge of Saratoga County, to the City of Saratoga Springs in the south. The Strategy is a blueprint that identifies conservation corridors and recreational areas that, if protected, will create regional connectivity, bolster the recreational and forest economy in Saratoga County, and increase public access to trails.

To learn more, read the full report or executive summary!

Since the Strategy was created, a Community Outreach Coordinator has been hired to help implement the plan and the project has received more than $550,000 in grants to continue conservation and trail work.

The Greentree Lake Addition property is listed as a conservation priority of the Strategy and is one of four significant properties OSI has protected to further progress in the creation of the recreational corridor.

OSI is focused on protection of both the southern and northern portions of the Palmertown Range, which runs from Fort Ticonderoga to Saratoga Springs. The Palmertown Range offers one of the best opportunities to protect a continuous swath of land between the Green and Adirondack Mountains, providing wildlife with a corridor for habitat and movement.

The Open Space Institute protects scenic, natural and historic landscapes to provide public enjoyment, conserve habitat and working lands and sustain communities. Founded in 1974 to protect significant landscapes in New York State, OSI has been a partner in the protection of nearly 2.2 million acres in North America. A leader in environmental conservation, OSI leverages its knowledge and attracts resources for strategic investments to make innovative land conservation happen. Visit OSI online at www.openspaceinstitute.org.