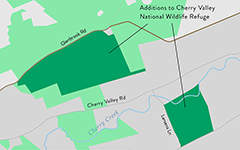 'These lands have been high on our priority list for years,' - Mike Horne, Cherry Valley NWR Manager

STROUDSBURG, Pa. (July 8, 2019) — Thanks to grant support from the Open Space Institute (OSI), The Nature Conservancy (TNC) recently purchased and transferred two properties to the U.S. Fish and Wildlife Service (USFWS), adding 175 acres to the Cherry Valley National Wildlife Refuge. Conservation of the properties safeguards habitat for plants and animals under a changing climate, while protecting headstream waters that flow into the Delaware River.

The two properties are a 52-acre parcel on Larsen’s Lane in Cherry Valley, and a 123-acre property on Glenbrook Road, adjacent to Stroud Township’s Hickory Valley Park. While the Glenbrook Road property is already open to the public, the USFWS will open the Larsen’s Lane property after restoring forests on the property to protect Cherry Creek — a state-designated “high quality” stream supporting naturally-reproducing trout and a source of clean drinking water to the main stem of the Delaware River.

“The successful protection addition of these new lands for Cherry Valley National Wildlife Refuge represent the latest success in a longstanding effort to protect this breathtaking, natural, and critical landscape,” said OSI Executive Vice President Peter Howell. “OSI is gratified to continue to contribute to the community through land conservation, which will serve the wildlife and local residents for years to come. We also congratulate TNC on their commitment to conservation at Cherry Valley National Wildlife Refuge.”

The Cherry Valley National Wildlife Refuge was established in 2008 to preserve critical habitat for migratory birds and threatened and endangered species. OSI has provided grants to four projects that have protected over 3,300 acres for the Refuge.

Approximately ½ mile of Cherry Creek flows through the Larsen’s Lane property, which traditionally was farmed with row crops — a practice that, when implemented without conservation measures, can negatively impact nearby waterways. As part of its restoration of the property, the USFWS will plant native warm-season grasses along the creek, providing habitat for birds and better protection for the stream.

The Glenbrook Road property scores high for “climate-resilience,” meaning that it will remain a haven for plants and animals, even as the climate changes. Currently the property serves as foraging habitat for several species of bats. The mouth of Hartman Cave is located on neighboring lands owned by TNC; the cave, which extends below the newly purchased parcel, is a hibernaculum for several bat species, and the site of some interesting archaeological discoveries in the late 1800’s.

Since its creation in 2014, OSI’s Delaware River Watershed Protection Fund has supported 50 land protection projects that are slated to conserve over 22,200 acres of lands that filter water within the Delaware Basin.

Funds for the purchase of the Glenbrook Road parcel were provided by OSI’s Resilient Landscapes Initiative, made possible with funding from the Doris Duke Charitable Foundation, Jane’s Trust, the North Atlantic Landscape Cooperative and the New York State Conservation Partnership Program/Land Trust Alliance. The Resilient Landscapes Initiative seeks to build capacity of land trusts working to respond to climate change.

Since its creation in 2013, OSI’s Resilient Landscapes Initiative has provided grants for 33 projects which are on target to protect more than 20,000 acres in the Northeast.

In addition to OSI, Stroud Township, USFWS, and the Pennsylvania Department of Conservation and Natural Resources also provided funding for the Glenbrook Road parcel.