Fifth project supported by OSI connects more than 1,000 acres of forests and trails

PUTNEY, VT. (Jan. 3, 2023)—Thanks to grant support from the Open Space Institute (OSI), one of the last remaining parcels along a beloved, scenic ridgeline in southern Vermont is now permanently protected from development. Conservation of the land will support climate protection and forest carbon storage, while ensuring public access for recreation.

Conservation of the 142-acre “Hinton Woods” property by the Putney Mountain Association (PMA) and the Vermont Land Trust (VLT) expands a block of protected, publicly accessible woods and wetlands that now totals more than 1,000 acres. The land also connects to important trails and public lands, including the Silvio O. Conte National Fish and Wildlife Refuge (Conte Refuge) to the south and the Putney Town Forest to the north.

Hinton Woods is the fifth Windmill Hill ridgeline property protected with funding from OSI, and the second supported by OSI’s Appalachian Landscapes Protection Fund (ALPF). Launched last year, the $18 million ALPF seeks to respond to the twin crises of biodiversity loss and climate change by specifically targeting forested areas along the Appalachian Mountains for conservation. These forests play an essential role in storing a majority of forest carbon in the U.S. and provide essential climate refuge for plants and animals.

“The conservation of Hinton Woods marks yet another important milestone in OSI's long-term efforts to protect the forests of the Appalachians in the face of a changing climate," said Joel Houser, OSI Field Coordinator. "We thank our partners at the Vermont Land Trust and Putney Mountain Association for their efforts to protect the land, which will provide long-term benefits for generations of people and wildlife."

The Hinton Woods property contains northern hardwood mixed forest, along with red oak, white pine, and red spruce, that give way to mixed hemlock stands on the western slopes. With a deer wintering area and a newly mapped vernal pool where salamanders breed, Hinton Woods is rich with wildlife. Wetlands straddle the ridge and feed tributaries of Salmon Brook and Grassy Brook, part of the Connecticut River watershed. The property also hosts the Barbed-bristle Bulrush, a plant that has been identified as endangered at both the federal and state levels.

The land is accessible via the Hinton Trail, which passes through forests and wetlands and is frequented by birds, deer, beavers, and other woodland animals. The property joins several protected lands along the Windmill Hill-Putney Mountain ridgeline stretching from Dummerston to Grafton; together, this stretch of land supports more than 30 miles of linked trails that support wildlife migration northward as climate changes. 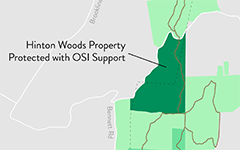