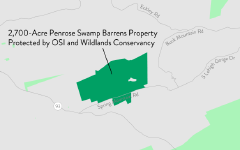 The Penrose Swamp Barrens property was protected by the Wildlands Conservancy with a grant from OSI’s Appalachian Landscapes Protection Fund, and is home to wetlands and forests including rare pine-oak barrens. With its protection, the land has been transferred to the Pennsylvania Department of Conservation and Natural Resources Bureau of Forestry for the expansion of Weiser State Forest.

The Penrose Swamp Barrens is the first of 13 projects, together spanning 18,000 acres from Tennessee to Maine, selected for support by OSI under the inaugural grant round of its $18 million Appalachian Landscape Protection Fund. The first-of-its-kind Fund was launched earlier this year to respond to the twin crises of climate change and biodiversity loss, and to support more equitable approaches to land conservation. Capitalized by the Doris Duke Charitable Foundation, OSI’s Fund focuses on protection of forests along the spine of the Appalachian Mountains, home of the world’s largest broadleaf forest. This region plays an irreplaceable role in storing the nation’s forest carbon and providing essential climate refuge for plants and animals.

“The successful conservation of Penrose Swamp Barrens is a model victory for protecting the fragile forests of the Appalachian region in the face of development,” said Peter Howell, Executive Vice President for OSI. “We commend our partners the Wildlands Conservancy, the State of Pennsylvania, and the National Fish and Wildlife Foundation, for securing the successful conservation of this irreplaceable property.”

The Appalachian Mountain region, stretching 1,500 miles from Alabama to Canada, contains vast swaths of healthy, large, and contiguous forests that are critical in combatting climate change. Despite their critical importance to the nation, the forests of the region face significant threats, including development, poor management, and energy extraction. Nationally, U.S. forests are permanently lost at a gross rate of just under a million acres per year.

The goal of OSI’s Appalachian Landscapes Protection Fund is to safeguard 50,000 acres of climate resilient lands within the region, that will store an estimated 15.6 million metric tons of carbon dioxide equivalent and sequester more than 40,000 metric tons of additional carbon dioxide equivalent each year. The Fund also supports complementary efforts to integrate climate science in conservation plans and support more equitable approaches to climate-oriented land conservation.

In addition to carbon storage, the permanent protection of Penrose Swamp Barrens secures a state Natural Heritage Area currently being studied for its abundant biodiversity and unique ecology. The property is also an Important Bird Area, as designated by the Pennsylvania Biological Survey Ornithological Technical Committee, and provides habitat for several plant species of special concern.