A scenic landscape steeped in history

Featuring dramatic rock outcroppings that look out upon the Hudson River, Manitou Point Nature Preserve is comprised of more than 100 acres, all open to the public.

Four miles of public hiking trails, permanently protected and managed by OSI, wind through the preserve’s densely wooded forests. A tidal marsh offers refuge to a variety of waterfowl and songbirds.

Since first purchasing Manitou Point in 1990, OSI has spent decades enhancing the Preserve to make it more welcoming and enjoyable for the public. In 2017, OSI collaborated on an improvement project for the preserve, including the creation of a new parking area and an orientation kiosk. The new parking area is now located directly on Route 9D, just 700 feet south of the original entrance, and will provide improved access to the preserve.

Manitou Point is a scenic landscape steeped in history. Formerly known as Mystery Point, Manitou Point was once owned by Edward Livingston, descendent of Philip Livingston, a signer of the Declaration of Independence.

Known as one of the Hudson River's great early 20th century estates, the property was sold several times before OSI stepped in and permanently protected this remarkable landscape.

Today thanks to OSI, Scenic Hudson, the Hudson Highlands Land Trust, the New York New Jersey Trail Conference, and the generosity of a conservation-minded property owner, the property’s scenic trail network will be enjoyed by generations to come.

This Place protects
Land for Recreation
Land for Healthy Communities 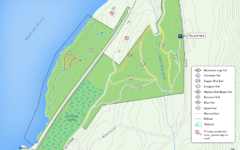