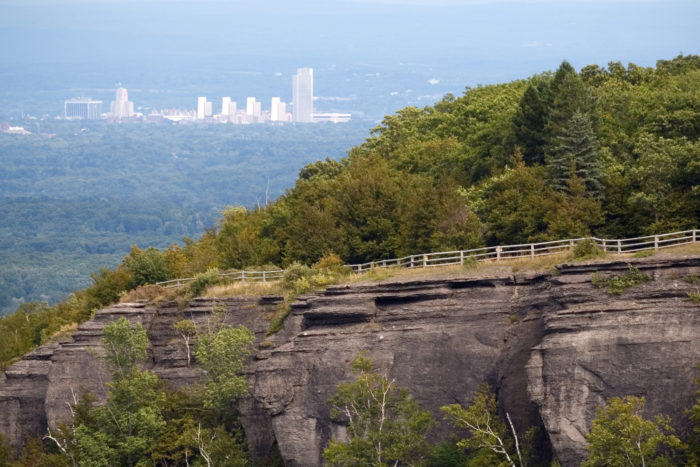 The lure of a landscape

Ten miles west of Albany, rugged limestone cliffs rise more than 1,100 feet over the Hudson and Mohawk Valleys. This escarpment provides a spectacular panorama of nearby mountain ranges, the Adirondacks, Taconics, Berkshires and Greens, surrounding the cities and communities of New York’s Capital Region.

Known as the Helderbergs, the escarpment’s exposed limestone cliffs are rich in fossils, chronicling a half-billion years of geological history that have intrigued paleontologists and geologists from around the world for decades.

The conservation centerpiece of the Helderberg Escarpment is John Boyd Thacher State Park, named for a former mayor of Albany who in 1903 began buying land in the Helderbergs to protect it from development.

Recognizing the importance of this singular landscape, we began identifying and acquiring key parcels along the escarpment in 1996 and conveying them to New York State as additions to Thacher Park. Through this work, over a period of 10 years, we have more than doubled the size of the park.

In 2015, we launched a campaign to raise $1 million in private funds for the new Thacher Park Center to create interpretive exhibits, interactive educational features and capture the special connection between the park and its devoted visitors. The Center, imagined as the place to showcase all there is to see, do and learn at John Boyd Thacher State Park, opened in 2017.

Built at the trailhead of the iconic and popular Indian Ladder Trail, the Center includes educational exhibits highlighting the geological and human history of the park, a multipurpose gathering space, and an outdoor patio.