This Story protects
Land for Recreation 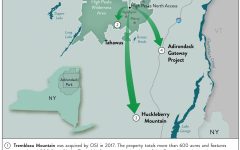 TAHAWUS, NY (July 18, 2018) - Having grown up in Lake Placid, the Open Space Institute’s (OSI) Northern program director Katie Petronis has always cherished the quiet forests and uninterrupted wilderness footpaths of the Adirondacks. Yet even for someone so familiar with the very best out-of-the-way trails, finding that solitude in the Adirondacks has become more of a challenge.

As a lifelong outdoor adventurer and someone who cares deeply about conservation, Petronis is encouraged by the growing number of people who have the desire to experience first-hand the natural beauty and rugged terrain of the Adirondacks, and the personal gratification that comes from spending a day on the land.

Yet with more visitors to the area comes added stress on the land. Some trails are taking a beating, especially those with a popular destination, such as those that lead to the famed High Peaks.

“It’s really wonderful to see a growing number of people exploring the Adirondack Park, since it means more people are developing a love and appreciation for the land and all it provides,” says Petronis. “But with this uptick comes an increased need for the conservation community, working with the state, to come up with solutions on the management side and expand recreational opportunities in other parts of the park.”

The work of OSI to provide people with new places to discover nature plays a critical role in this equation. In the face of increasing human pressure on the land, OSI is offering solutions that will better disperse eager explorers by securing additional acreage for public access; working with the Department of Environmental Conservation (DEC) to create a new point of entry to the High Peaks area; and improving recreational amenities and access points at OSI’s long-held Tahawus property.

As visitors drive into the High Peaks from the southeast, they enter the region by way of Tahawus, a 258-acre forested tract complete with an abandoned historic village and 19th century blast furnace. The property was acquired by OSI in 2003 as part of a much larger 10,000-acre purchase. With most of the land having been transferred to the state, OSI, with the support the Prospect Hills Foundation, the Walbridge Fund, and the Overhills Foundation, has installed interpretive signs and completed other site work on sections of Tahawus that it retains.

Then just last year, OSI unveiled a series of planned improvements aimed at bolstering Tahawus as a recreational destination, while also developing alternative routes to nearby Mount Marcy and  and a host of nearby High Peaks destinations such as Mount Marshall, Iroquois Peak, Boundary Peak, and the Colden and Algonquin peaks. Trailhead improvements, a comfort station, and the potential conversion of an historic cottage into an outfitter station should also draw hikers and climbers—helping to ease the pressure on the northern High Peaks entry points.

Some 30 minutes southeast of Tahawus is another destination that promises to become an important Adirondack entry point, thanks in part to OSI. In 2017, Governor Andrew Cuomo unveiled plans to repurpose Frontier Town, once a popular Wild West theme park that has since fallen into disrepair, as the new “Gateway to the Adirondacks.”

The Gateway project builds on a master plan commissioned by OSI and supported by the New York State Department of Environmental Conservation (DEC). The Gateway will serve as a new jumping-off point to such places as the state’s recently acquired 10,000-acre Boreas Pond property, as well as myriad hiking corridors. The Gateway will also offer a public campground and equestrian facilities and trails.

Meanwhile, OSI continues to conserve breathtaking areas in other parts of the Adirondacks. In 2017, OSI purchased the Trembleau Mountain-Lake Champlain Shoreline property in Essex County and Huckleberry Mountain in Warren County. Each of these features breathtaking views, as well as thigh-burning hiking trails that are equal to the grandeur of the High Peaks.

In the southern section of Adirondack Park, the 1,285-acre Huckleberry Mountain property in Johnsburg features spectacular ridgeline hiking and access to a series of previously inaccessible rock climbing routes.  Huckleberry Mountain will become a new addition to Wilcox Lake Wild Forest, and will dramatically expand access to Crane Mountain, a popular, publicly-accessible mountain peak in the Wild Forest.

“What OSI has accomplished in the Adirondacks in the past few decades is absolutely tremendous,” marveled Alan Via, a local hiking guide and author who is enthusiastic about OSI’s most recent Adirondack acquisition projects. “Huckleberry Mountain will be a great attraction in the region — fantastic for climbers, and hikers will love the views. Meanwhile, the Trembleau Mountain property is another great idea that will attract hikers and families from all over.”

Looking ahead, the rate of continued visitor growth only underscores the importance of the work of conservation groups like OSI, and their ongoing commitment to managing access and expanding recreational opportunities around the Adirondacks’ beloved natural areas.

“Welcoming people to the Adirondacks is not only good for local economies, but also critical to encouraging greater appreciation for all that makes this area worth preserving,” said Basil Seggos, Commissioner of the New York State DEC. “The challenge lies in pursuing expanded recreational opportunities while instilling a conservation ethic that will protect the Adirondacks for future generations.”

There is wide agreement that land conservation plays an important role in reducing harmful gases that cause climate change. The question is, how big a role?