OSI is protecting open space in a fast-growing community.

Long-time Orange County New York resident Kieran Conroy remembers when his boyhood home was still surrounded by unbroken forest. “I grew up hiking and escaping into nature,” he recalls.

But as the years rolled by and Orange County became one of New York’s fastest- growing regions, great swaths of the local landscape were developed. “Seeing how heavy the traffic is, and how noisy it’s become, we need to give people the opportunity to experience nature,” Conroy urges.

In the face of Orange County’s development pressure, the Open Space Institute (OSI) and its partners have been mobilizing landscape-scale conservation to ensure the region’s most precious natural areas stay green, forever.

A boon for recreation

Building on its success in creating and adding to state parks, OSI secured a public-access conservation easement at Black Rock Forest and donated it to the State of New York.

“Linking these parks with protected land will help expand recreation, support wildlife habitat, and protect clean water even as Orange County continues to grow,” said Jim Delaune, executive director of the Orange County Land Trust, OSI’s regional conservation partner. “As a result of our partnership with OSI, this plan is gaining real momentum.”

The rate of growth in Orange County only underscores the importance of OSI’s work and its ongoing commitment to securing critical natural resources forever.

In addition to having protected land that serves as a recreational destination and filter for drinking water, Orange County also features the rugged topography and intact forest cover that make a landscape climate resilient: meaning  it is likely  to remain a haven for a diversity of plants and animals even as the climate changes.

OSI has been at the forefront of identifying climate-resilient landscapes. Black Rock Forest, a biological field station and ecological marvel protected thanks to OSI, lies at the heart of Orange County’s climate-resilient corridor and is a prime example. In the largest-ever conservation easement in New York State, the nearly 4,000-acre property was permanently protected in 2014.

This Story protects
Land for Recreation
Land for Clean Water 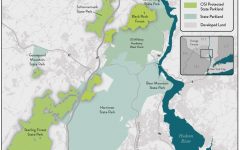 Recognizing that the environmental movement is strengthened by different perspectives and voices, the Open Space Institute launched its Conservation Diversity Fellowship in 2016.